A\\VOID "the terrible consequences of telling the truth"
is now available on most streaming platforms. The LP is coming later 2022. 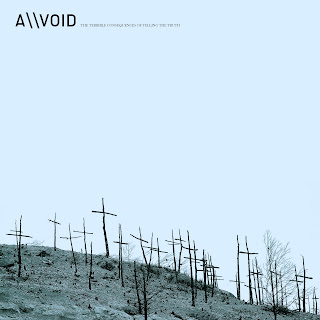 “Hawkwind on heroin” -
“Like some kind of black metal Twin Peaks” -
These quotes are not necessarily reflective of us, the members of the band, or our musical influences, they are simply things people have said about our live performances.
A\\VOID was formed by Gareth Smith and Andy Henriksson in Stockholm, Sweden, during the foul winter of 2020, as society began rapidly closing down. With their hardcore punk band, Victims, embarking on an enforced pandemic-hiatus, they decided it was time to finally put together that “slow band” they’d been talking about for years. There was no fixed idea on how the band was to sound but it would soon become obvious that the music they were making was some sort of cinematic soundtrack to everything that was happening around them.
Dark, moody and apocalyptic with politically-themed titles, the instrumental pieces that would form their first album, The Terrible Consequences of Telling the Truth, was written during the course of the 2020 in the sanctuary of the band’s rehearsal space, located in an industrial estate on the outskirts of the city.
The collective would grow during that time into the septet it is today. The additional members, Erik Bystedt, David Fothergill, Pigge Larsson, Martin Savage and Patrik Thorngren come from various musical and geographical backgrounds, from progressive jazz, indie pop, kraut rock to hardcore punk, from Chile, England, Scotland and Sweden.
Gareth Smith: Guitar
Erik Bystedt: Guitar
Martin Savage: Saxophone
Patrik Thorngren: Bass
David Fothergill: Guitar
Pigge Larsson: Piano and keybords
Andy Henriksson: Drums
________________________________________________________________
a.void.stockholm [a] gmail.com